David Bowie died while I was stuck in traffic in Baltimore, which is probably an OK place to be when someone who's work you've, on occasion, admired, dies. You can bet on the local listener-supported public radio station to quickly assemble a memorial playlist, replete with the appropriate mix of hits and "deep cuts." But most of Bowie's work is "deep cuts" in the age of streaming music and digital audio. No one wants genius anymore.

Baltimore traffic is horrific, you should know. But it's nothing compared to D.C. traffic, which is almost enjoyably bad. Gridlock gave me time to, as the millennials say, process the Thin White Duke's passing. But it was less process and more shruggie, because why shouldn't Bowie die? We're all dying. Then I realized the traffic had gotten to me, so I exited the highway somewhere in Columbia to find a Wawa. Coffee fixes everything that a bad commute can break.

Back in the car now, and re-focused on my destination: a technology road show in downtown D.C., where tie-less executives would espouse the benefits of Azure and attempt to dazzle world-weary engineers with simply stunning stats on cloud adoption. I've forgotten all of them. But I'm fairly sure they were stunning at the time. At least all of the attendees sporting Microsoft logos and product names seemed stunned.

But before I arrive at the hotel that was hosting the event, my father calls to tell me my grandmother has died. His mom, my gram, my last grandparent. We expected this, as her last weeks in hospice were awful, like watching a flower wilt. My father spoke in a voice that fathers use when they don't want their children to know they're heartbroken. Hearing that voice was as devastating as hearing that gram had died.

I was somewhere on New York Avenue, in NE, where the construction rearranges lane markings in a manner that befuddles even those of us who could drive D.C. blindfolded. I don't remember how I got there, but suddenly I was in the lower levels of a hotel, I can't remember which one. I know that we're supposed to remember more about days when something significant happens; I've listened to Season 1 of Serial more times than most people. But I can't remember getting from place to place on January 10, 2016. I just remember being places.

I attend the tech event, and as usual I walk in after the lights have dimmed and the keynote speaker has taken the stage. In a former life, I curated my professional brand to support a nascent career as an influencer, so I was supposed to go bananas over events like these. But I looked too closely at the world of influence marketing, recoiled at the use of words like "goodness" and "expert," and quietly moved on.

The short version is that the Azure Roadshow was terrible, and I felt terrible, so I left.

I could have taken the elevator down to the garage below, found my car, paid whatever ridiculous parking fee one pays to park in D.C., and went home. Maybe I should have.

Instead, I notice that the National Gallery of Art was only a few blocks away, and I remember that when I think of who I think I am, I think I'm the kind of person that visits art galleries often, even though I don't. And of course there was the opportunity to drink hot coffee outside in the cold. Never pass those up.

I set out towards the NGA, with a specific idea of what to admire while there. It's a series of paintings I had learned about while struggling in my senior studio art class so long ago, a series of four paintings depicting the stages of a man's life. You've likely seen one or more of these paintings, even if you don't care for art much, because they pop up everywhere. It's Thomas Cole's The Voyage of Life, and once you've lived through a crisis or two, it'll evoke all of those pent-up emotions you've been evading.

Security in Smithsonian museums requires the inspection of bags, and that backpacks be worn on a single shoulder, not both. This isn't a vestige of security theatre in the beltway sense; it's a matter of protecting artwork from the accidental bump that's likely with a large backpack behind you. I didn't have a backpack anyway, but I always thought it strange. I only know this because I just looked it up.

At the information desk, just beyond the security station, I see a docent, a woman, enjoying the whimsy of her encore career as an unpaid evangelist of the arts. I resist the temptation to use my phone to locate the four paintings; talking to people is still a favorite pastime. I walk up and announce the reason for my visit: "Mr. Cole, please."

She knows exactly what I'm looking for. And after she shares the room number with me, she says, reassuringly, "It's always good to know which boat you're in." 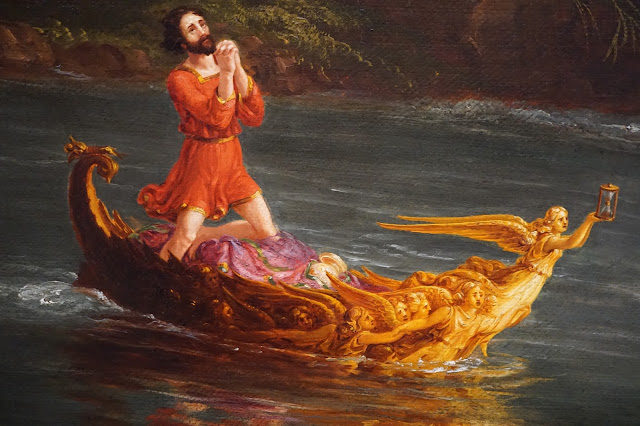