Did you catch the Tech Field Day Delegate Roundtable discussion from Interop New York this year? If not, you'll want to watch the replay. We discuss the state of technology conferences, career development for new IT professionals, and why asking the right question is so important.


Interop is the last large-scale technology conference that isn't explicitly tied to a single vendor. And that's significant; in the last two years, we've seen new tech conferences pop up that are hyper-focused on specific software. VeeamOn is a good example (I expect Veeam fanboys to furrow their brow with this example). We've seen events like Cisco Live and VMworld balloon into the chaotic frenzies they are. And we've seen independent conferences like Interop dwindle in participation in spite of the many wonderful opportunities to learn and network with great engineers from all over the IT spectrum.

Tech Field Day invited me (along with much more knowledgeable folks: Howard Marks, John Herbert, Tony Matke, Jason Edelman, and our indefatigable minder and moderator Tom Hollingsworth) to attend Interop and hear about innovations from Cisco, Glue Networks, Akamai, and HP Networking. The roundtable discussion is a bonus, and in my opinion it's what makes a TFD event unique.

Yes, yes: TFD paid my travel and lodging and meal expenses while in NYC.
at 8:29 AM

How to Suppress Those Awful Ask.com Options When Installing Java

Let's start off with some categorical truths: everyone hates Java, and everyone hates Ask.com. Here's another one: everyone uses Java, and no one uses Ask.com. No one, that is, except for the unlucky souls who inadvertently install the Ask.com browser add-ons and set it to their default search engine during the Java installer. Poor bastards. 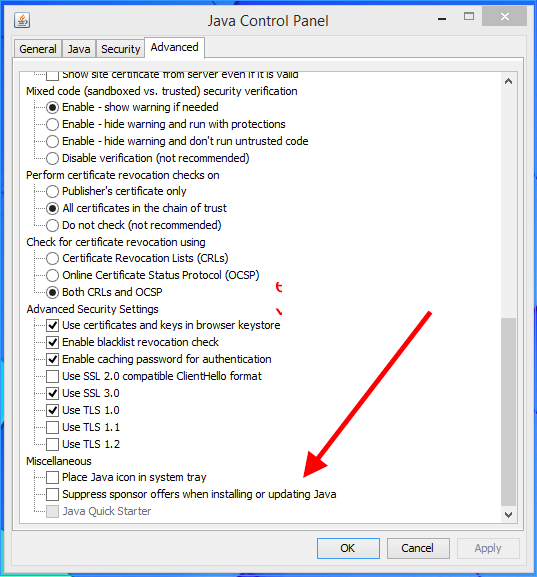 I only deal with Java these days because my kids play Minecraft. A lot. Not as much as this dude, but still. And since Java receives security patches on a frequent basis (we'll call it weekly, and we won't be far off), I spend time updating Java more often than I'd like. I grew tired of the gratuitous attempts by Oracle to install Ask.com software for you in an opt-out manner. And I'm not alone: many of us have banded together to petition Larry Ellison to stop bundling Ask Toolbar with the Java installer. Sadly, only ~20,000 people of the Internet have signed up. So.... yeah.

Until then, here's what you can do to prevent seeing that damned Ask.com screen during the installer.


Now you won't be bothered with that crap Oracle tries to force on you when you install or update future versions of Java.

ICYMI: Dr. Vint Cerf delivered a keynote address to the HHS IPv6 Symposium at the National Library of Medicine at NIH this morning. Dr. Cerf's contributions to the Internet are nearly unbelievable: he co-created TCP/IP, and can get away with saying things like, "When I turned the Internet on in January of 1983." Do yourself a favor and read his Google Research profile; he's currently Vice President and Chief Internet Evangelist at Google.

Dr. Cerf spoke about some of the barriers to IPv6 adoption in both the consumer and business / federal spaces. In both cases, it's a matter of need: if technologists don't pound on tables and demand IPv6 from Internet service providers and hardware / software vendors, we'll be discussing this migration for another 16 years. He cited Comcast as an example of an ISP who is leading the way with their ambitious IPv6 adoption program.

The Internet of Things (IoT for the initialization crowd) is suddenly a major driver for IPv6: with the future of sensors embedded in everything, addressing everything is only possible with IPv6. We exhausted IPv4 addresses with the devices of today; devices of tomorrow need v6.

After the address, Dr. Cerf was kind enough to field questions from the audience. Two questions in particular elicited interesting responses: the first was a question about whether IPv6 had baked-in security features that would serve to encourage faster adoption. I expected the answer to be yes, but Dr. Cerf said that this was not true, and instead it's a widely held assumption of IPv6. And the second question was, "what's next after IPv6?" The answer took an interesting turn: the development of an interplanetary network protocol, and why TCP/IP doesn't work with RTTs that exceed 7 minutes. Once again, in space, the speed of light is just too slow.

Finally, Dr. Cerf talked about his new project: the preservation of digital information. He cited some examples from our lifetime of data storage technology that is obsolete: 5 1/4" floppies, VHS cassettes, and (soon!) polycarbonate discs. In many cases, the challenge is more than just preserving the data; reading from the media, and being able to reliably interpret the data on the media, also pose great risks to the life of stored data.

I'll try to make it back this afternoon for the CIO's presentation on NIH's IPv6 Project. The monsoon-like rains may keep me at my desk. But never fear: the event is videocast here.
at 12:49 PM