To prepare you for this post: I've been using a MacBook Air for about 4 years now, and before that I had (still have, in fact) a 13" MacBook (I even paid the dreaded black tax). And I've had an iPhone since the 3G (more specifically, I've had a 3G, a 4, another 4, and a 6). I think I have 4 iPads. Oh wait, I have a MacBook Pro, too. And 100 years ago when I was young I had a Performa that a guy stole from UPS and sold to me when I was too naive to know what I was getting myself into. But the statute of limitations has expired so NBD.)

I'm well aware that real problems and evils exist in the world. I understand that the world's collective energies are best spent addressing, if not solving, real problems like poverty, inequality, and cancer. As I write this from the safety and comfort of an environmentally pleasant office space in Bethesda, Maryland, I recognize that the problems I am about to convey have no meaning in the larger space we call Earth. What you are about to read is squarely in the domain of the #firstworldproblem.

I must admit to you, dear reader, that I am the victim of conditioning by Apple, Inc. I have been conditioned to not simply use the devices that they market to me, but to examine the most minute detail of each product. It's a matter of having seen so many keynotes, where well-dressed executives use words like, "perfect," "gorgeous," and "beautiful" to describe electronics. It's a statement of how far we've come from the days of Radio Shack Tandys (which no one would dare describe using the previously listed adjectives).

I now expect my phone to be beautiful. I expect a seamless transition from screen to body. I expect perfect, gorgeous, and beauty.

For years, Apple has lived up to these descriptors. And in many ways, they still do. But lately, two minor annoyances have crept into my day. These problems are trivial. They are petty. They are not worth the time it took me to put this post together. And yet I can't stop thinking about them, because I've heard Apple tell me time and time again, to look at the details.

Exhibit A - The iPhone 6 Case

One reason I expect so much from Apple products is the price tag. The iPhone 6 silicone case will run you $35. And since the iPhone 6 is nearly impossible to hold without some type of case, you likely bought this one, too. It's my fault for buying one, I know. But I liked the fact that it didn't add much to the thickness of the phone, which was important.

The trouble started in the spring, when I noticed that the edges of the case were starting to disintegrate. The silicone was separating from the hard plastic shell that gives the case its form. And because I just bought a macro lens for the a6000, I took some photographs in an attempt to convey the magnitude of the problem.

CAN YOU FEEL MY OUTRAGE? JUST LOOK AT THIS SHIT.

I mean, where is the perfection here? I'm careful with my phone. It doesn't get dropped, or tossed about, or otherwise manhandled. This case fell apart within five months of light duty. I am certain that I would not have noticed these imperfections on any other case, or more to the point, and other brand of case. But again, this AAPL conditioning has me trained on detail. It's the attention to detail, from design to manufacture to consumer, that Apple has staked out as its territory. And it's in this territory where it is beginning to fail.

Exhibit B - The Repaired MacBook Air

I hope you've calmed down from the table-flipping rage that you assuredly experienced from the photos above. Because this next shit is straight-up cray cray.

I had the battery replaced in the MBA because, well, because it was failing. As in 100% charge to 0% charge in 15 minutes. So I took a long walk from my office to the Apple Store nearby, and had it repaired. AppleCare was still active, so the replacement was covered.

I'm happy to report that the repair was successful. This MBA will live a long and happy life.

But get ready for rage, because just look at the condition in which my precious MBA was returned to me: 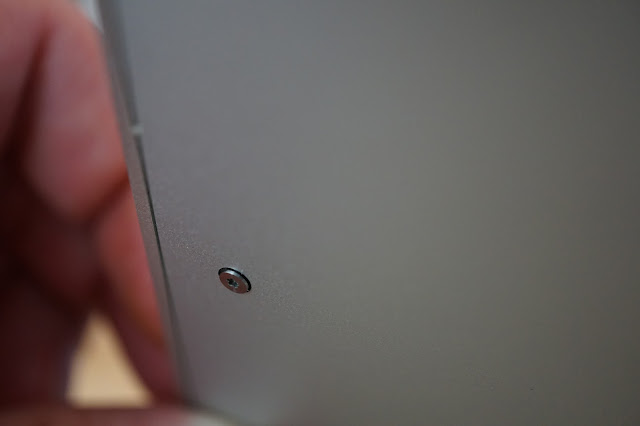 HOLY SHIT DO YOU SEE THAT? One of the screws on the bottom of the laptop wasn't tightened properly. AND IT STICKS OUT ABOUT 1MILLIMETER.

Every time I pick up my laptop, I feel this goddamned screw sticking out. It might as well be a goddamned thorn, or a wart, or something. Or a mountain.

Again, it's the expectation of perfection that makes me even notice this in the first place. I have a Dell something or other that I use for work. That thing has screws missing, edges worn, labels half peeled off, and I could not care less. F it. It turns on when I push the button, and does stuff when I faceroll the keyboard. It could have smoke pouring out of the vents and I wouldn't care. But a screw that isn't flush with the underside of the MBA? A goddamned crisis.

Kidding, sarcasm, rageface, hyperbole, and caps lock aside, this post isn't about problems with Apple, or problems with its iPhones and MacBook Air repair abilities. It's not about the marketing machine that has made Apple, Inc. the nearly $1T company it is today.  It's not about the legacy of Steve Jobs, who knew how to sell you something you never knew you needed. It's about my acquired delusion that form is as important as function.

And if you're wondering what I'm going to do about these two microcrises: I bought a new silicone case (because insanity is fun), and I'll pick up a Torx screwdriver and fix that goddamned screw. And with these two problems solved, for now, I'll move on to something new.
at 6:13 PM