I've been on the fence about this for a while now, and it's finally time: I'm giving up on Twitter.

I've written about my growing dissatisfaction with the service in the past, notably when they switched the icon for favorites from stars to hearts. That still bothers me. I deleted my first account a few days before the election, when Twitter's cesspool of vile neck-vomit reached its apex. And a few months into my second account, I'm hanging it up for good. 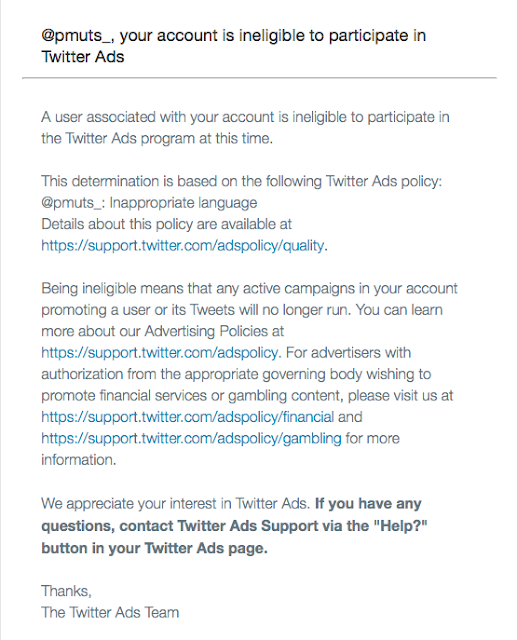 To give you an idea what happened, I changed my bio (as I had done many times in the past) to include a bad word. A really bad word. A word so bad that I won't repeat it here. Just kidding.

The word was fuck.

Used in the following sentence: "it's probably not a good idea to put "who gives a fuck" as my bio, is it."

Which is funny, because I guess it's not?

So to put things in perspective: the President can use Twitter to threaten nuclear holocaust, faceless trolls can make threats of sexual violence, and anonymous hacker collectives can use the platform to extort their victims. That's all cool. But you put a single "fuck" in your bio, and Twitter refuses to accept your money for promoted tweets. Glad they are paying attention to the real problems with their platform.

So good riddance once and for all. I'm convinced now, more than ever, that email is the best communications platform on the Internet.
at 7:03 AM